The primary focus of the JV has been on the development and optimisation of existing oil pools. A disciplined and pragmatic technical approach in nearby areas has uncovered robust exploration potential. The Wizard Lake Rex Oil Discovery is now in development and focussed on the Rex (Upper Mannville) oil play. The successful drilling and testing of the first Wizard Lake Rex-1 well re-directed the immediate focus in CY2019 to the continued development of the Rex field as outlined below.

The Wizard Lake Rex well was spud on the 24 November 2018 and, following a 27 stage fracture stimulation program, the well commenced cleanup flows on December 24th.

Initial flow testing of the Wizard Lake Rex horizontal oil well recorded production rates of more than 300 barrels of oil per day prior to the completion of testing. Following reconciliation of the hydrocarbons produced from the January 2019 flow test of its Wizard Lake Rex well, the total oil produced from the 16‐day flow test has been increased from 1833 barrels of oil to 2845 barrels – a 55% increase.

Rex-2 was drilled and completed in August 2019.  A successful 35 stage frac placing over 1000 tonnes of proppant in to the Rex formation was announed on 26 August 2019 and flowback and testing commenced shortly after.

The final 24 hour flow rates to 4 September exceeded flowrates from Rex-1 and oil continue to trend upwards, averaging 700 boepd during the final 24 hours of testing (50% oil). This compares to around 340 boepd for Rex-1.

After flowing unassisted for a period of 82 hours, the well was shut-in to optimize tubing size and configure the well to flow to the central facility. Testing will recommence to continue the cleanout operation, stabilize flow, and assess the capability of the well.

In its Wizard Lake reserves update announced to the ASX on 22 August 2019, Whitebark indicated the likelihood of 20+ gross well locations in the oil pool. The Company has development plans including the recently drilled and stimulated Rex‐2 (6 September 2019). Rex‐2 is situated to the north of Rex‐1 and on the same location as the new Rex facilities.

On 22 March 2019, WBE announced that the 2019 Wizard Lake development program will encompass the construction of a pipeline and installation of initial production facilities on a multi‐well pad and two development wells – Rex-2 and 3.

Construction was completed Q2 2019 on the multi‐well pad and associated facilities,  including the pipeline allowing Rex‐1 well to be brought into commercial production in June.  The modular production and processing facility is located 1.6 km NW from the Rex‐ 1 well and has the capacity to service additional Rex wells as they are brought into production.

In October 2019, the company confirmed plans to increase the capacity of the surface facilities at Wizard Lake to cope with the higher than expected flows from Rex-2 in addition to the production from Rex-2.  This development will include the construction of a gas pipeline which commenced construction – announced on 1 November 2019.  In addition to this, the Company acquired a key 4.7km pipeline securing access to apipeline gathering system and gas plant operated by Petrus Resources, 14 km to the north-west. 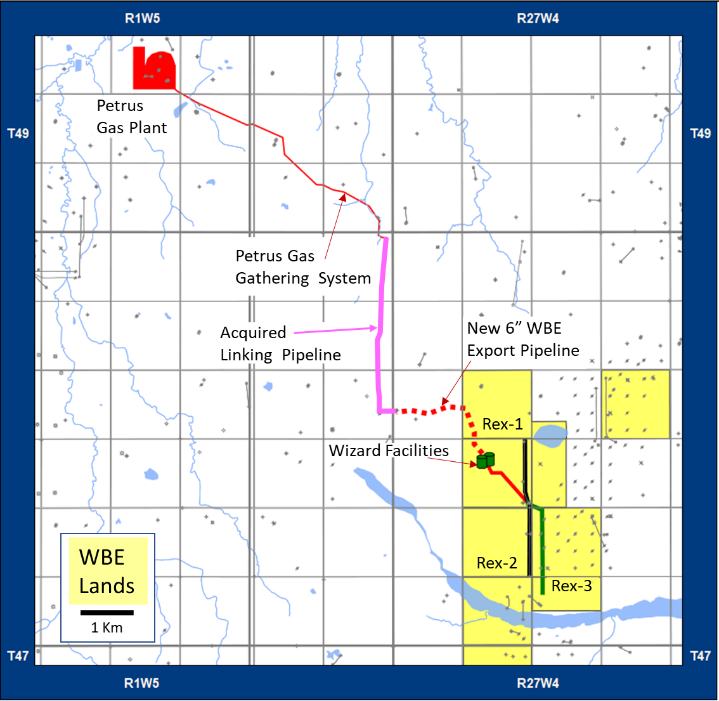